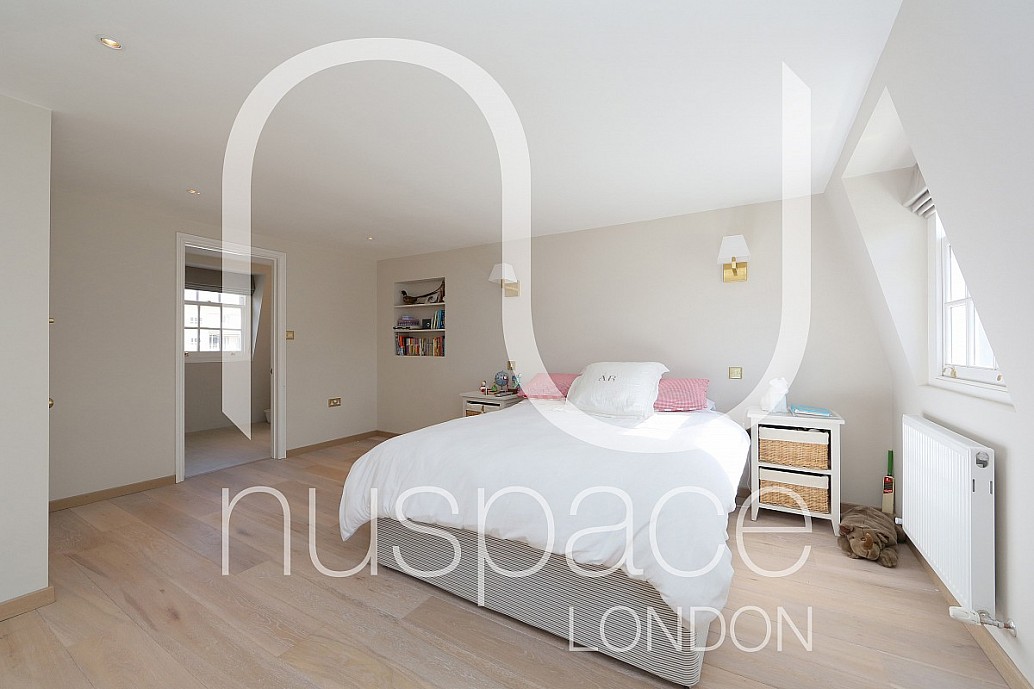 Some might think that adding a sixth floor onto a five-storey townhouse may not be that necessary, but at £8,000 added value per sq ft a loft conversion in Belgravia is one of the best investments a person can make. It’s also important to get it right, and strict conservation regulations will ensure you can’t go far wrong. Based on a referral from their sister, the clients enlisted nuspace for the task. For Graham and his team of loft conversion specialists at nuspace, getting their plans approved by the conservation planners was a very straightforward process. ‘We work with planners all across west London, so know the ropes inside out,’ explains Graham. ‘For this project it was crucial that the materials matched very well with the existing building,’ he says, ‘in such a desirable residential area – we’re talking some of London’s prime real estate – it had to be in keeping with traditions of the area.’

As the newly built loft was so high up, special fire regulations came into place. ‘We had to install a superior smoke system to appease building control. At such a height the only way to escape is down the building; this special system notifies the fire brigade exactly where the problem is coming from, and there’s an automatic opening ventilation window (AOV) that opens when there’s a certain amount of smoke to let it out of the house,’ Graham explains.

The family that own the townhouse wanted an additional en suite bedroom tucked up away from the rest of the house. The space needed to be in keeping with the interiors of the property, so all of the materials used were very high quality. ‘The whole house is immaculate,’ says Graham, so the loft really was the cherry on the icing. The total cost was about £95,000, and the loft conversion would have added at least £1,000,000 to the value of the property in an area like this. In fact, loft conversions in Kensington & Chelsea add so much value that almost all of them have already been converted. ‘The house is not far from Sloane Square, and there are lots of nice pubs around,’ says Graham, ‘it’s a lovely part of town.’

Graham and the team at nuspace decided to put in a double mansard loft conversion, which means that you build out to the front as well as the back to 72 degrees, rather than the normal pitched roof at about 45 degrees. ‘It’s named after the French architect Mansard, the buildings in Paris are all Mansard and that’s where it comes from,’ explains Graham. ‘What it means is you get a lot more space to the front of the property,’ he adds, ‘in London it’s pretty rare to be able to do a front mansard loft conversion, so if you live a street surrounded by houses that have front mansards then count yourself lucky.’

The client went for white stained oak flooring and neutral walls to keep the space bright and airy. Gold fixtures keep it consistent with the property and a large bank of built in wardrobes mean that everything can be stored away neatly.

The bathroom continues on the luxurious feel with textured stone tiles and a double width walk in shower with a low profile shower tray. There’s a thermostat just outside the shower so it can be turned on before you get in, rather than getting a wet arm in the process. A little niche in the wall provides storage space for shampoos to ensure that the tray doesn’t get too cluttered, and a silent extractor fan prevents against damp.

The neutral palette is soothing and capitalises on the light brought in by the sash window.  The fixtures are sleek with a mirror that’s flush to the wall and separate vanity lights for task lighting. A solid four-panel door matches the rest of the doors in the property, and the black out blind matches the ones in the bedroom for continuity. On of the biggest challenges of the project was bringing all of the materials up to such a height, particularly the bathroom fixtures, but a skilled team of contractors ensured that it was done with maximum safety and efficiency.

The existing staircase throughout the rest of the property is a turned handrail that sweeps around, so there was no obvious joints that made it easy to continue. ‘It was quite difficult to follow the existing staircase,’ says Graham, ‘but we had a skilled carpenter carefully match it so that it flows and there’s a natural progression up to the new extension.’ The loft conversion looks and feels like it’s always been there now.